Waste, weather and emissions: Calgary will wrestle with key questions if it hosts another Winter Olympics

The whole world is watching during the Olympics, but it’s not just athletes who must perform.

The host city is in the spotlight for two weeks, facing global pressures when it comes to sustainability.

According to The Guardian, 1993 was the year the International Olympic Committee (IOC), included the environment as the third tier of the Games, coming in behind sport and culture.

The 2000 Olympics in Sydney showed the world what incorporating sustainability into major events looked like. This was upheld in 2012, when London hosted “the greenest Olympics ever.”

But not all host cities keep their promises. 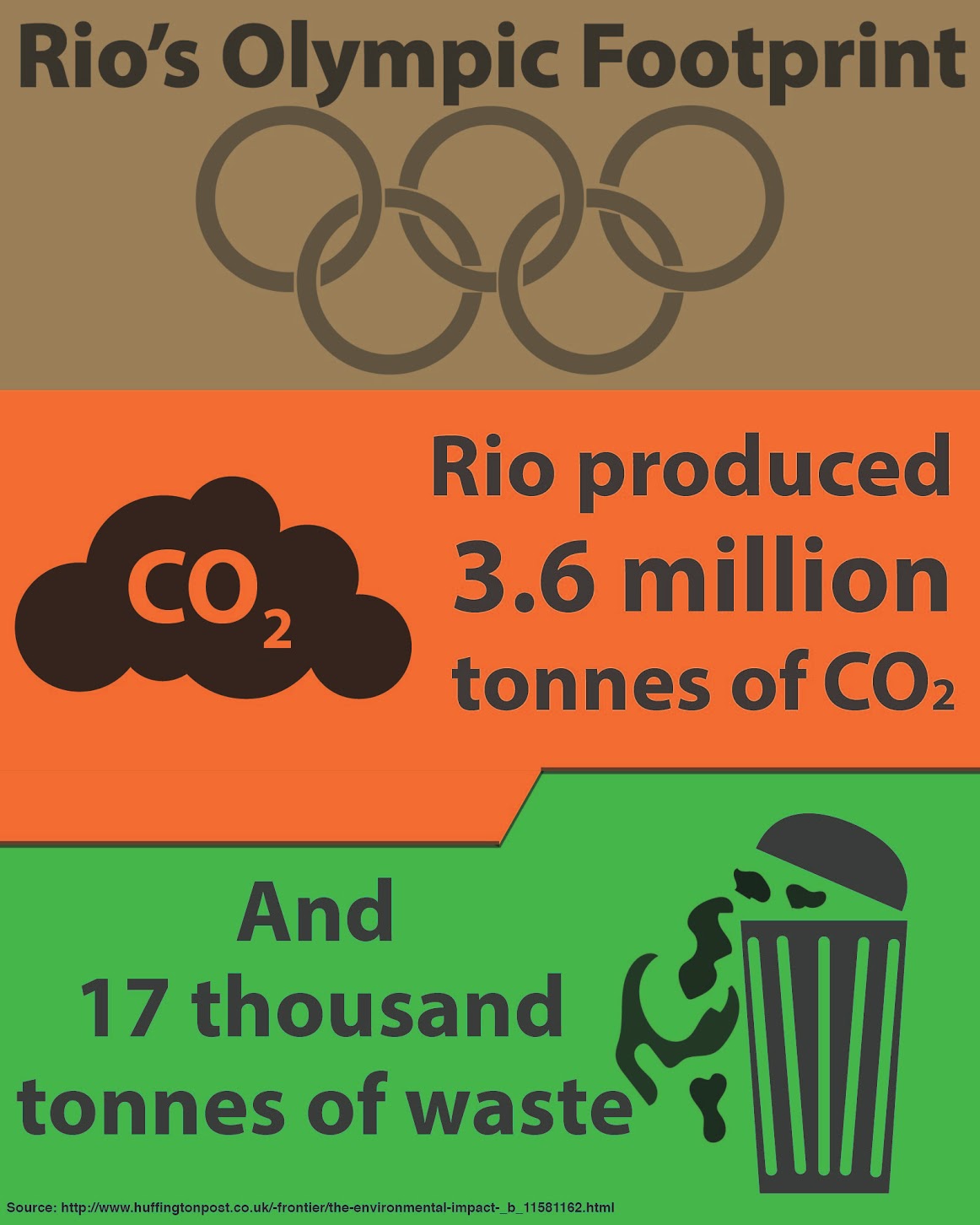 Despite numerous plans Rio produced 3.6 million tonnes of greenhouse gases and 17 thousand tonnes of waste during the Olympics. Infographic by Matt Hull.

In 2016, Rio’s city and Games officials pledged to offset greenhouse gases produced by all athletes and staff, refused to source any meat products from deforested areas and even pledged to clean up some of their bodies of water, according to the Huffington Post.

Despite these efforts, an estimated 3.6 million tonnes of CO2 was produced over the duration of the Rio Games, with 17 thousand tonnes of waste entering the landfill.

The City of Calgary is working to determine whether or not there is an intent to bid on the upcoming 2026 Olympics.

Though the Games could bring back the nostalgia of Calgary’s 1988 Winter Olympics, along with some much-needed economic stimulation to the city, there’s evidence that suggests that the environmental price might be just too high. 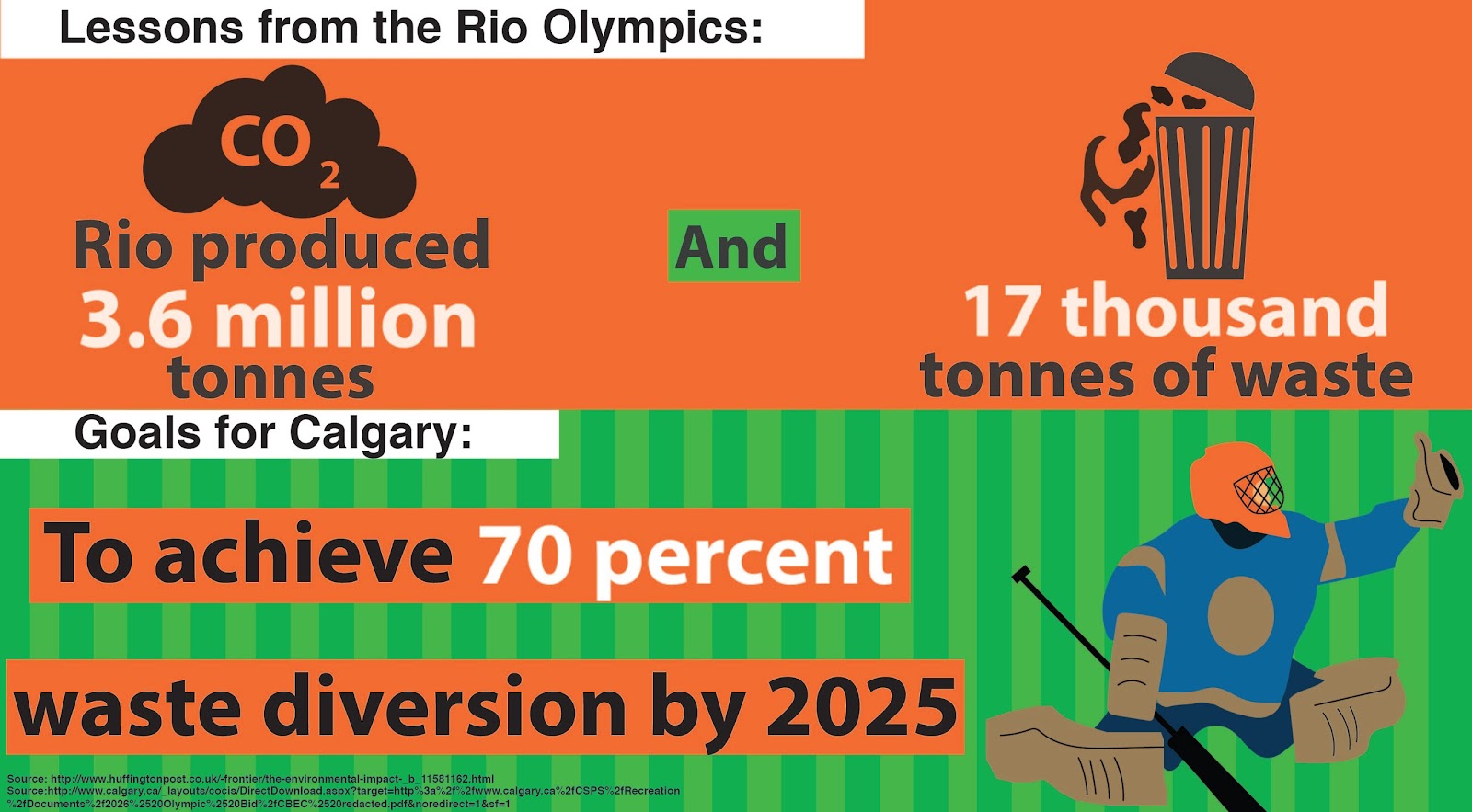 Waste and the Olympics: The road to sustainability

One issue that host cities try to tackle surrounds waste management, which is directly affected by the increase in tourism generated by the Games. Calgary would need to set realistic and achievable goals if it hosts the Winter Olympics in 2026. .

Rio de Janeiro’s plan was ambitious. According to a 2013 sustainability management plan landfills were to be upgraded, sewage-filled waterways cleaned and recycling facilities built.

Oceanographer David Zee told CBS News that the Brazilian government agreed to install eight treatment plants along Rio's rivers to reduce pollution –  they built just one. They agreed to treat 80 per cent of the sewage which ended up in Guanabara Bay – only half was treated. Multiple news agencies reported trash, sewage, hospital waste and even body parts were found in waterways despite the elaborate plans developed by Olympic organizers.

The Vancouver Olympic Games in 2010 had more success turning goals into action. 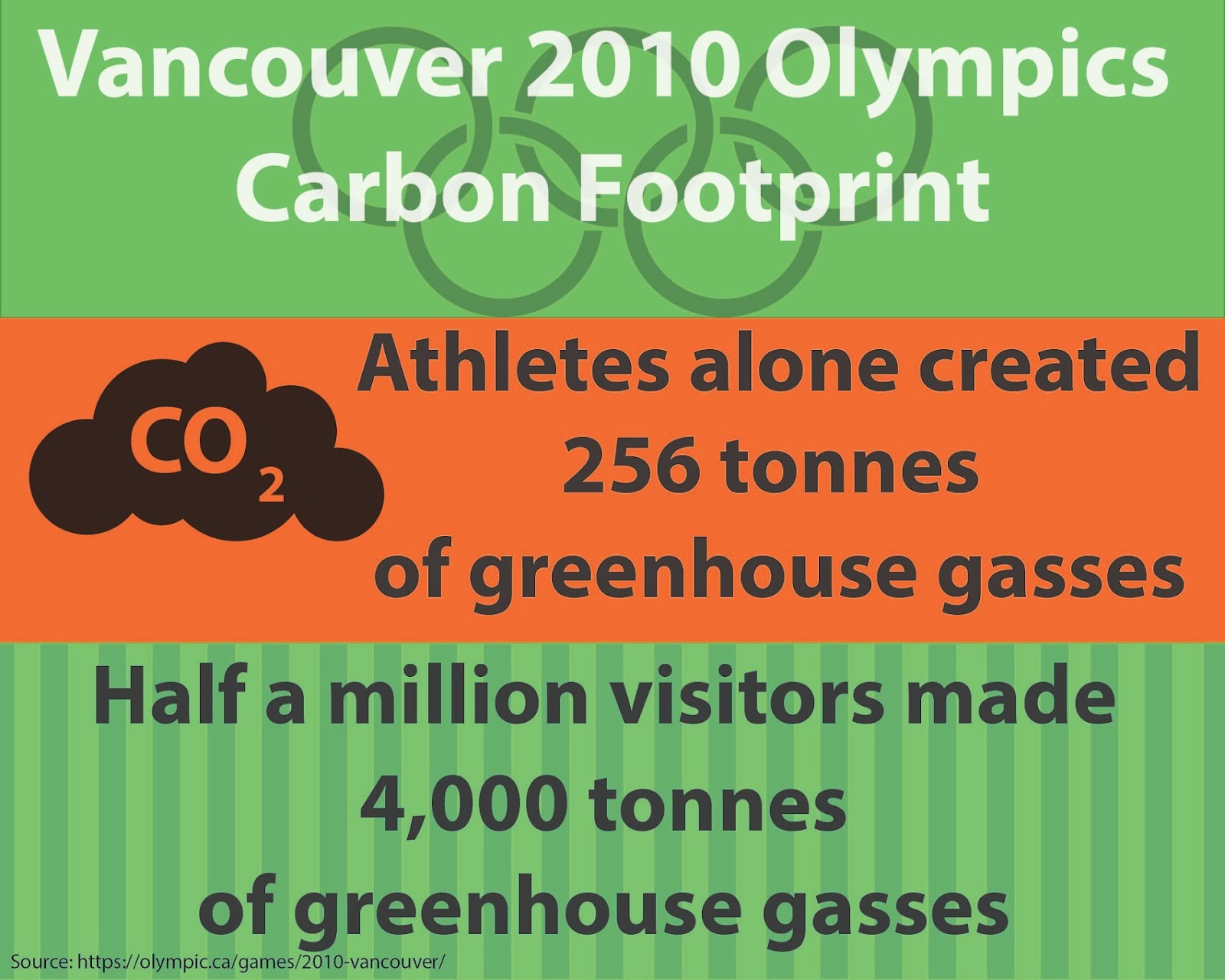 A half million visitors at the Vancouver Olympics produced an estimated 4,000 tonnes of greenhouse gases. Infographic by Matt Hull.

During the nine-month span around the Olympics and Paralympics, the University of British Columbia worked on the The Olympic Game’s Impact Study to monitor, report and safeguard the environment. This study reported that waste headed to the landfill decreased by 12.3 per cent. The decrease in waste ending up in landfills was the result of a 12.3 per cent increase in recycling, composting and reusing of waste materials. The same study discovered that the total amount of waste generated during the mega-event still increased tenfold, thanks to the arrival of 3.6-billion tourists between January and March of 2010, a 24 per cent jump from the last year.

Calgary has ambitious plans for waste management leading up to 2026. According to the Olympic Bid Exploration Committee, the City of Calgary is going to strive toward zero waste through innovative recycling and composting programs. The target is to achieve 70 per cent waste diversion from landfills by 2025.

These figures raise more questions when you consider what Calgary does with recycled material. According to The Canadian Press, China has banned the imports of recycled materials affecting some cities including Calgary. Before, Calgary sent all of our recycled paper and half of recycled plastics to China. Now these recyclables sit in storage and could end up in the landfill.

If Calgary hosts the Olympics, the city is going to need a more detailed plan on how to protect the environment. . Calgarians must figure out how to dispose excess waste during the 2026 Olympics and consider what other environmental impacts Calgary will face.

What do warm winters mean for the Calgary 2026 Olympic Games Bid?

When environment writer Kevin Van Tighem thinks about Calgary hosting another Olympic Games, he says he worries about the impacts.

“For instance, if we have a really crappy winter they're going to have to figure out some way to make snow, and really mild winters can be very stressful for the streams.”

Van Tighem, a former superintendent of Banff National Parks, says lack of snow was a big problem in ‘88. He believes it will be an even bigger issue if the 2026 Olympics occur in Calgary.

“Our snow banks are becoming much less reliable here and the variability between season to season are much more pronounced,” says Van Tighem,.

“Recently our winters just aren’t what they used to be, that’s the time we’re in right now in history.”

The environment is most-likely the last thing the committee is thinking about. According to Van Tighem, once the Olympics are in place, the rule book goes out the window and everything is just “go, go, go,” from there.

The 1988 Calgary Olympic Games Official Report acknowledges the efforts that were required to make snow. They included over 30 kilometres of pipe, 246 snowmaking hydrants and 152 litres of water per second running though those pipes which would spray snow to cover 75 per cent of the ski runs and 100 per cent of the Olympic courses during ‘88.

A team of researchers led by Daniel Scott - a professor in the Department of Geography and Environmental Management at the University of Waterloo, a University Research Chair, as well as the Executive Director of the Interdisciplinary Centre on Climate Change conducted a study on Winter Olympics during an era of climate change.  Weather patterns showed Calgary to be reliable host in ‘88 and reliable future host as well. That said, although Calgary’s climate is colder, it is still likely that artificial snow would need to be made. Cities like Salt Lake City  and Albertville, France, are even more reliable than Calgary when it comes to conducive climates for outdoor winter sports.

While a 2026 Olympics would last for just two weeks, its ecological footprint could last much longer considering the amount of resources consumed at large-scale events.

An ecological footprint can be defined as a combined look at the overall resources consumed.

In 2007, a UK team of researchers published their study of the environmental consequences of major sporting events. They concluded that of the factors that contribute to a footprint, travel is the third largest, with food consumption and local energy production following close behind.

In a 2010 study,  Social Legacies and Sport Mega-Events, it was reported that air travel is responsible for more than 90 per cent of greenhouse gases produced by large sporting events in Germany in 2005.

Greenhouse gases are directly contributing to our warming planet. They do this by trapping the sun’s rays, so instead of being reflected away, they remain here, trapping heat inside the Earth’s atmosphere which warms the land and oceans.

Using similar formulas, we can estimate based on the Vancouver 2010 Olympics that the athletes alone created about 256 tonnes of greenhouse gases, and that more than half a million visitors accounted for over 4,000.

“Our snow banks are becoming much less reliable here and the variability between season to season are much more pronounced.” -Kevin Van Tighem

As reported by The Guardian, while the aviation industry only technically accounts for 1.5 to 2 per cent of global CO2 emissions, carbon dioxide isn’t the only thing being pumped into our air. Air travel also releases nitrous oxide, water vapour and soot into the atmosphere. Carbon emissions are also expelled because of:

Prior the 2008 Beijing Summer Olympics, the IOC worked with the Chinese government to reduce its overall emissions in an effort to meet the World Health Organization’s air quality standards.

Through reducing output from factories, alternating car bans and suspending the use of the majority of government vehicles, China was able cut carbon emissions by an estimated 56 per cent.

There restrictions were strict, effective but unsustainable. Emissions returned to pre-Olympic levels shortly after.

Since the early 1990s, environmental sustainability has become an increasing factor in determining a viable city to host the Games.

The Bid Exploration Report explains how the carbon tax initiative provides financial incentive to reduce emission. This will be acheived by using “efficient district heating” within any new or refurbished buildings that are built as part of the 2026 Olympic Games.

More on Calgary’s carbon plan can be found here.

This story is part of Hindsight 2026, a joint project between the Sprawl and the Calgary Journal. We’re digging into past Olympics to evaluate whether a 2026 Winter Games in Calgary would help or hinder our city.