A group of elite female hockey players in Calgary say the game is hampered by a long-time ban on bodychecking that has left them frustrated and looking for change.

For some Calgary female hockey players, a long-time ban on bodychecking has left them frustrated and looking for change.Produced by Rayane Sabbagh and Peter Brand.

“I think that we should be able to hit. It’s not like we have a six-foot, 200-pound guy out there looking to take someone's head off. We’re all around the same size,’’ says Erica Kromm, 28, captain of the Calgary Inferno from the Canadian Women’s Hockey League. 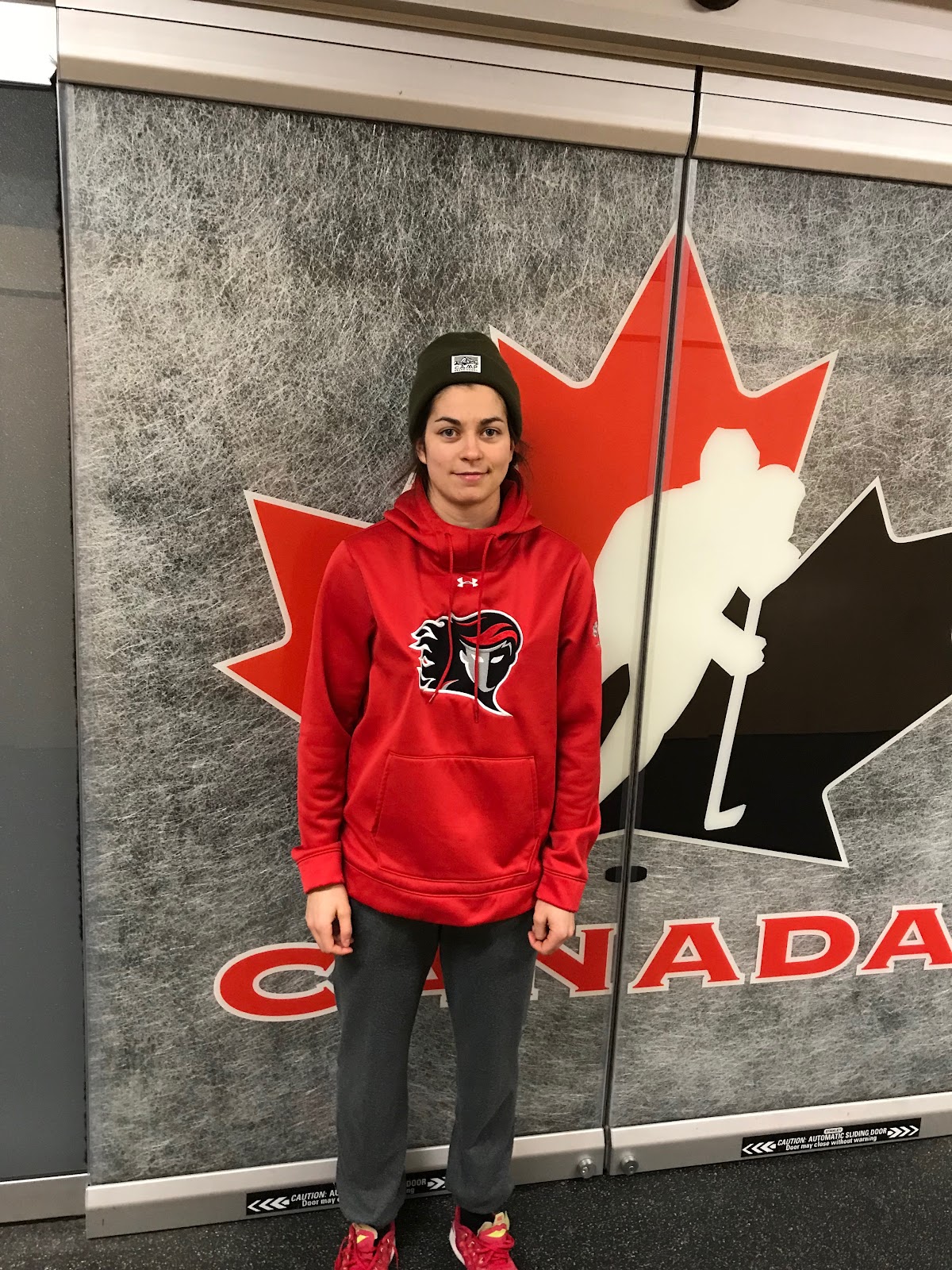 Erica Kromm, captain for the Calgary Inferno of the Canadian Women's Hockey League, says that she and a number of her teammates would like to see bodychecking legalized in women’s hockey. Photo by Rayane Sabbagh.

The problem with refs

Some of the city’s elite female hockey players say a big problem is that some officials call the bodychecking penalties, and others turn their heads.

The International Ice Hockey Federation states that bodychecking in women’s hockey is supposed to garner a minimum two-minute minor that can escalate to a game misconduct depending on the severity of the hit. 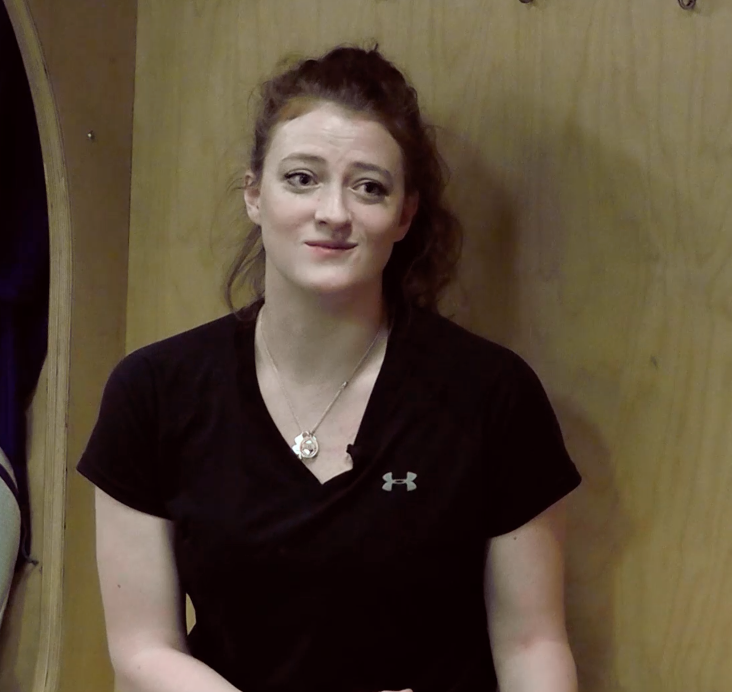 Dakota Woodworth was traded to Calgary via the Boston Blades during the 2016-2017 season. Woodworth says the women’s game is fine and does not lack entertainment value. Woodworth says the CWHL is much more physical than the hockey she played at Boston University. Photo by Rayane Sabbagh.

“It’s kind of luck of the draw. You can play the same exact game and get no penalties, or get four or five the next game and that can drastically change the game if you’re in the box for 10 minutes a period.”

Devonie Deschamps, 23, a seasoned five-year vet of the U-SPORTS Western Division and captain of the Mount Royal University women’s hockey team, says one typically knows beforehand what the game will be like based on who is refereeing. 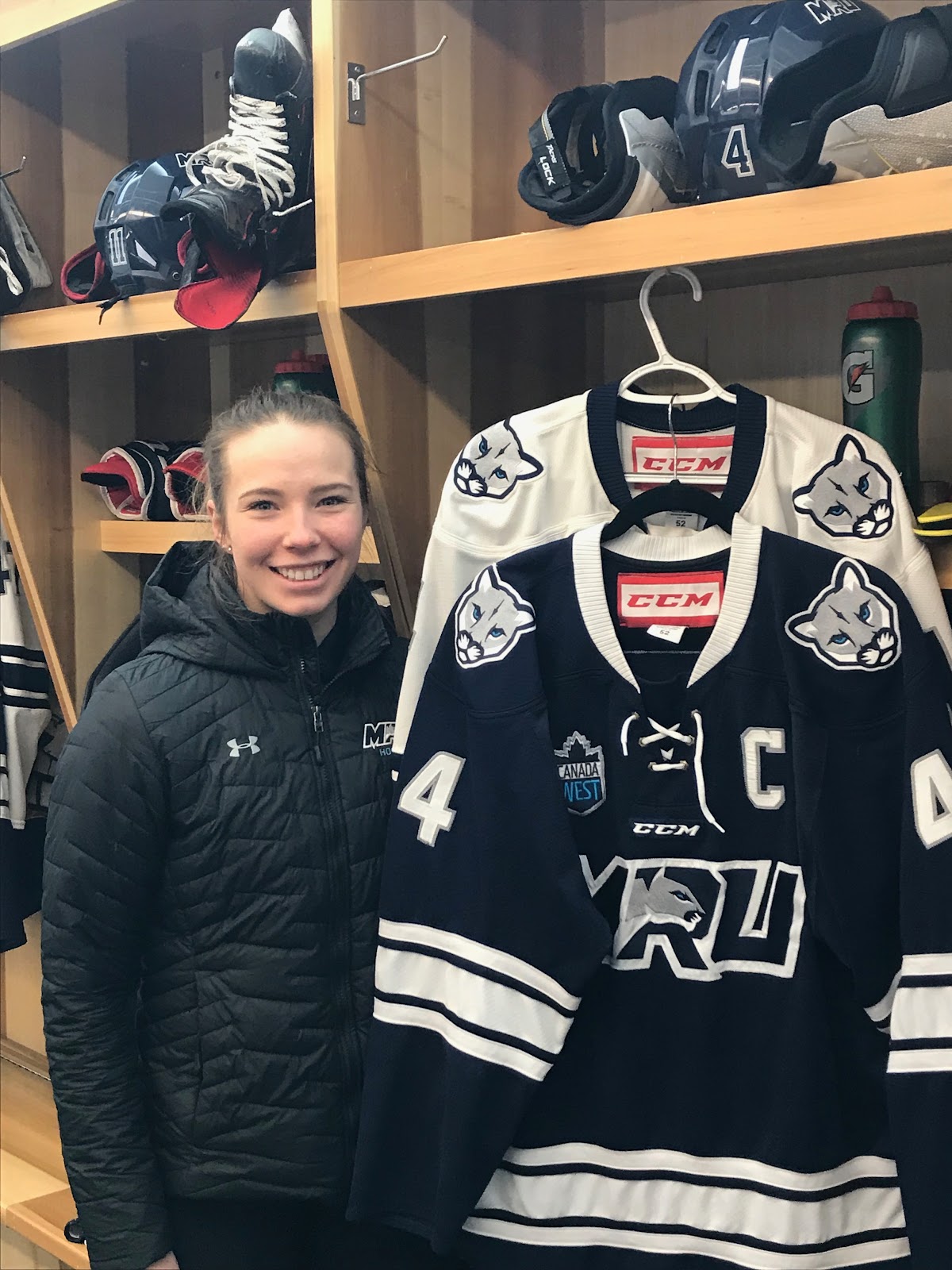 Devonie Deschamps just completed playing five years of hockey for the Cougars. Deschamps says that if bodychecking were to be introduced in women’s hockey it would have to be at a very young age, and essentially the rule would have to be grandfathered into university leagues. Photo by Peter Brand.

“Even the game against Saskatchewan, we came into the game knowing that there were going to be a lot of penalties. But then you see the refs the next night and know that it's going to be a bit more of a physical game where not many penalties are going to be called, which is what happens.”

Though inconsistent officiating is a big problem in terms of getting away with bodychecking, many suggest sexism is the underlying  problem.

The problem with sexism

Amanda Gushue, now 30,  started playing competitively at 16 and eventually playing for the SAIT Trojans. Gushue currently plays for The Unknowns in the Southern Alberta Women’s Hockey Association and calls the rule outdated and contradictory. 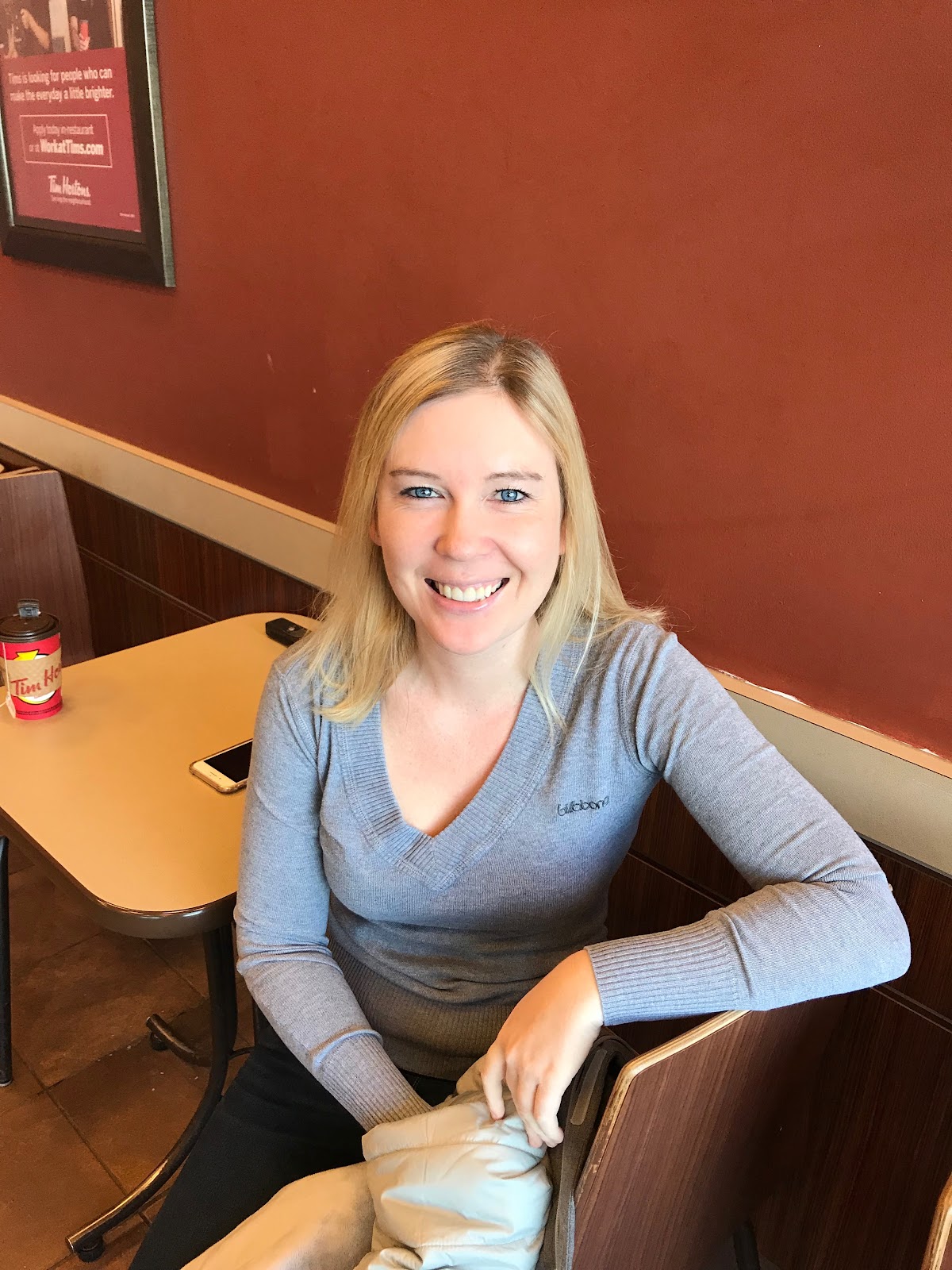 Amanda Gushue plays and coaches women's hockey. Gushue has never played in a co-ed checking league, but she thinks the ban on body checking in women’s hockey should be changed. Photo by Peter Brand.

“I think it's a double standard. I was watching the Olympics and I can't think of any other sport where the rules are different for men and women.  And yeah, I think with everything that's going on with women and women's rights now, I think there absolutely should be the same rules and checking.”

For younger female players in minor hockey, the issue is especially confusing when they’re allowed to hit as youngsters and then transition into higher-level play where checking is banned.

Bodychecking hasn’t always been banned in women’s hockey. It was very much a part of the  game until 1990 when the IIHF Women’s World Championship changed the rule, internationally.

In an email statement from Hockey Canada, manager of communications Morgan Bell wrote: “The international female hockey community came together and decided to remove body checking from the game to help level the playing field among nations, and ensure that the sport remained attractive to new players and their parents.”

The problem when girls arrive from co-ed bodychecking leagues

Deschamps, a star defender, says she would love to see hitting in women’s hockey.

She started playing hockey in a co-ed checking league until AA Bantam. She says the problem at the university level is that girls arrive with different experiences.

“Some girls have not ever played men's hockey, so they do not know how to take or see the hit [coming]. If checking were to be introduced at the university level, there would be a number of injuries early on until checking was practiced at every level.”

Because of the speed and physicality of the game, hockey is naturally going to have some body contact whether it's legal or not.

Bodychecking is among the reasons hockey draws spectators in the men's leagues. Are women's leagues missing out?

The argument for hitting as a draw for the crowds

Scott Rivett, head coach of the MRU women’s team, also coached men's hockey at SAIT. Rivett argues that there is no need for checking in women’s hockey. 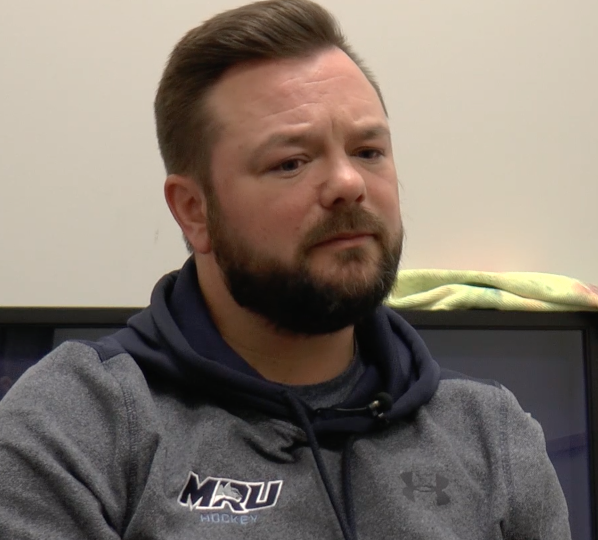 Scott Rivett, head coach of the Mount Royal University women’s team, believes introducing bodychecking in the women's game would not create any further interest in the game as far as spectatorship goes. Photo by Rayane Sabbagh.

“There is plenty of body contact in our game and the way it's played, but I don't think the game itself needs bodychecking in order to have an appeal for fans.”

Inferno forward Dakota Woodworth, who transitioned from co-ed contact to non-contact in university, says the women’s game has more finesse because of the extra couple of seconds you get to execute your skill set.

“In the men's game, you're constantly worried about someone coming in and checking you. In the women’s game you still have a little bit of time [for finesse play] because you’re not immediately on your butt.”

However, fellow Inferno player Erica Kromm disagrees and says she would enjoy playing more if she could hit. 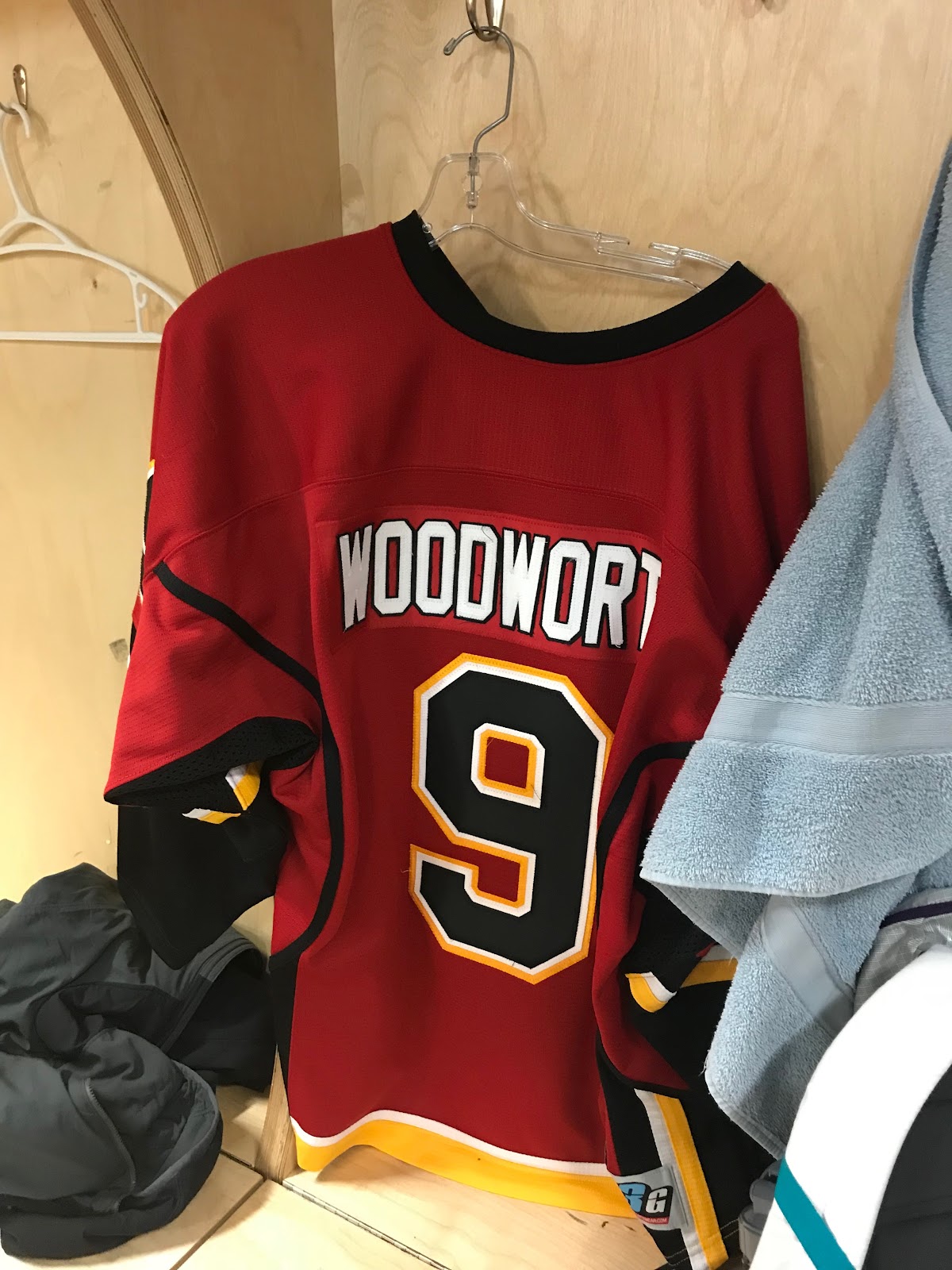 Dakota Woodworth’s jersey hangs from her locker at her home arena located at Winsport in Calgary. Photo by Peter Brand.

A 2017 U.S. study in the Orthopaedic Journal of Sports Medicine surveyed 459 female players in the National Collegiate Athletic Association. The researchers indicated nearly half reported a concussion in their hockey careers, and one in 10 players reported a diagnosed concussion in the 2014/15 season. The report also highlighted the problem of players failing to disclose their concussion symptoms and playing through their injuries.

A 2013 study in the BMC Sports Science, Medicine and Rehabilitation peer-reviewed journal examined data on more than 56,000 sports-related injuries in children and youth in Canada. Interestingly, concussions were highest in ringette (ages five-19) which is predominately a female sport that doesn’t allow bodychecking. The second highest incidence of concussions played out in ice hockey. In girls hockey (15-19), 16.3 per cent suffered concussions, compared to 9.5 per cent of boys in the same age.

Devonie Deschamps with the MRU Cougars says she’s seen plenty of concussions in the women’s games, but she’s not convinced concussions would necessarily escalate if bodychecking were allowed.

“I think it would decrease the amount of concussions and injuries.”