The wheel of hypersensitivity: How an MRU student and a professor turned a discussion about sensitive topics into an art installation

A new art installation at MRU is helping students understand each others’ emotions around controversial topics in an interactive way.

Along with fourth-year student Dani Massee, Milena Radzikowska, an associate professor in information design, she decided to ask the question, “Are we becoming hypersensitive?”

Taking it a step further, they turned an online issue into a physical one, by making a giant wheel of triggering topics on a massive piece of wood.

The pair believes making topics tactile forces the public to give a little more thought to their responses.

“It’s a big interactive infographic,” Massee says. “The purpose of it was to get people out of their comfort zones and discussing these issues.”

“We talked a lot about the idea of offence, being provoked and what provoked us and how do we respond to things that we find provoking, “ says Radzikowska.

“So I talked to Dani about the idea of creation and translating data into physical objects, and the idea of the community being a part of the creation process and what that could look like.”

The installation helps make data more tangible by putting a topic directly in the hands of the viewer. Rather than staring at a computer screen filled with words, observers instead experience other people’s emotions running through their fingers.

“With social media and technology it’s easier to defend your opinions online, you’re not face-to-face with anyone,” says Massee.

How the wheel works:

Each colour of yarn represents a different emotion: yellow for proud, red for angry, blue for hurt and gray for indifferent. 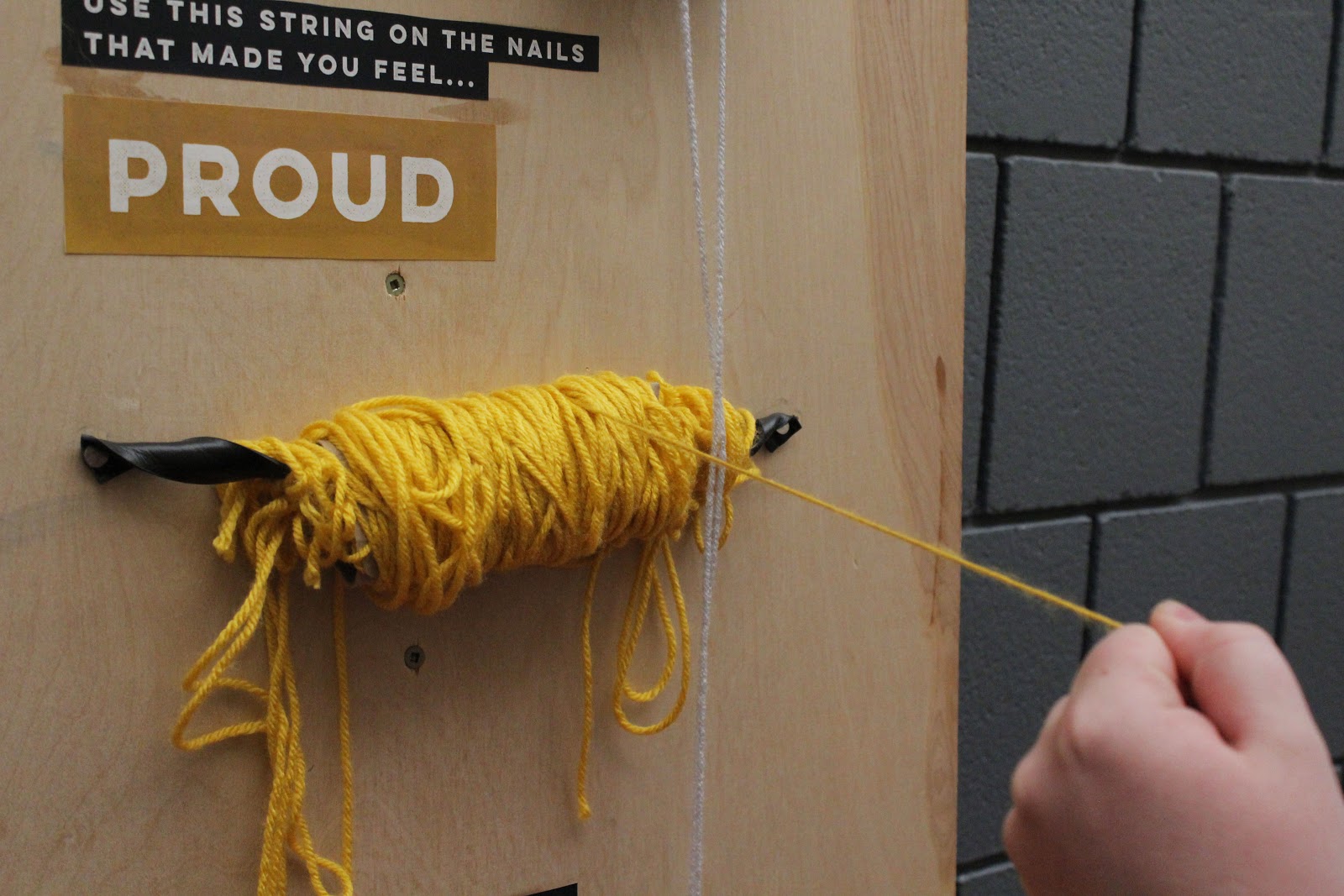 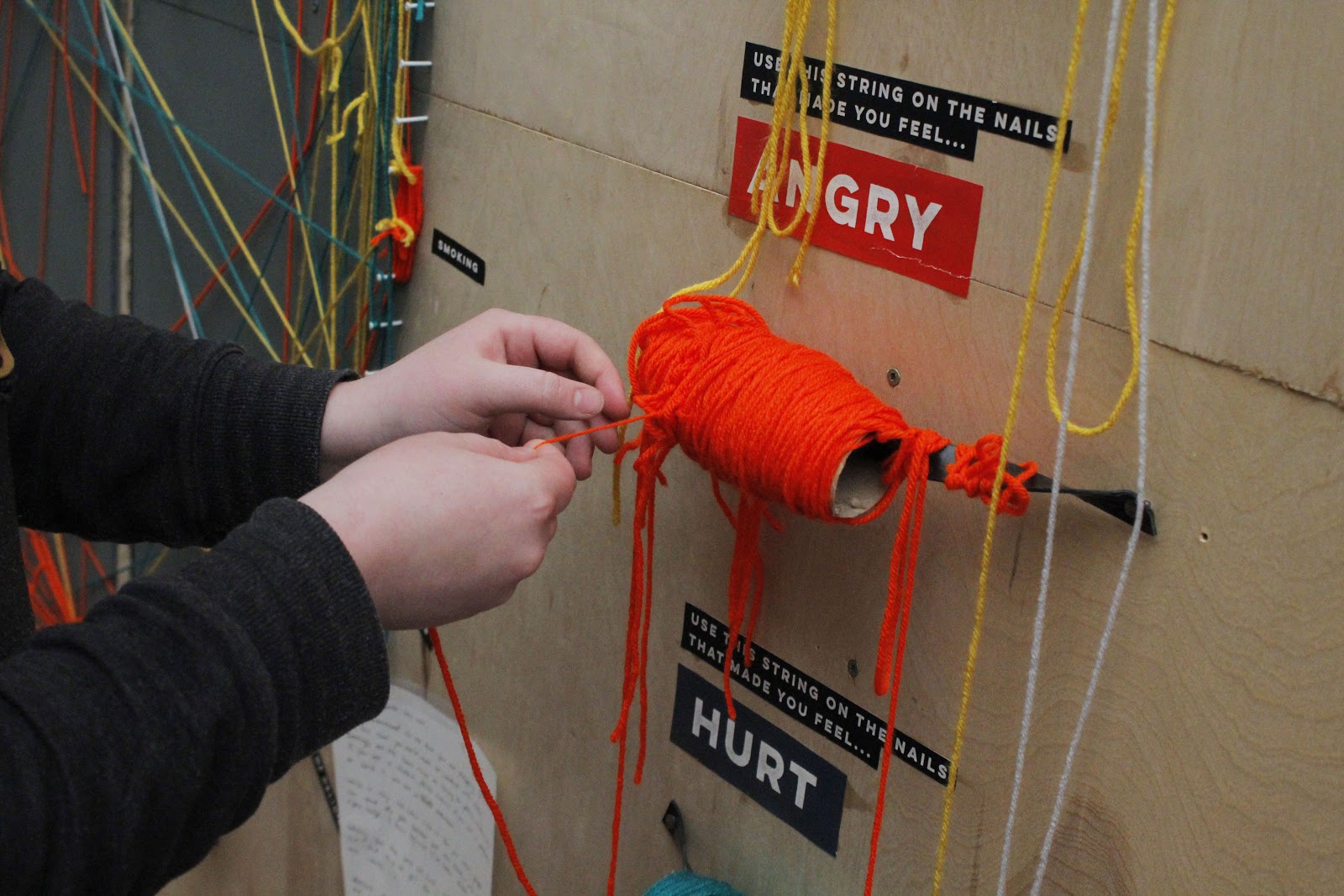 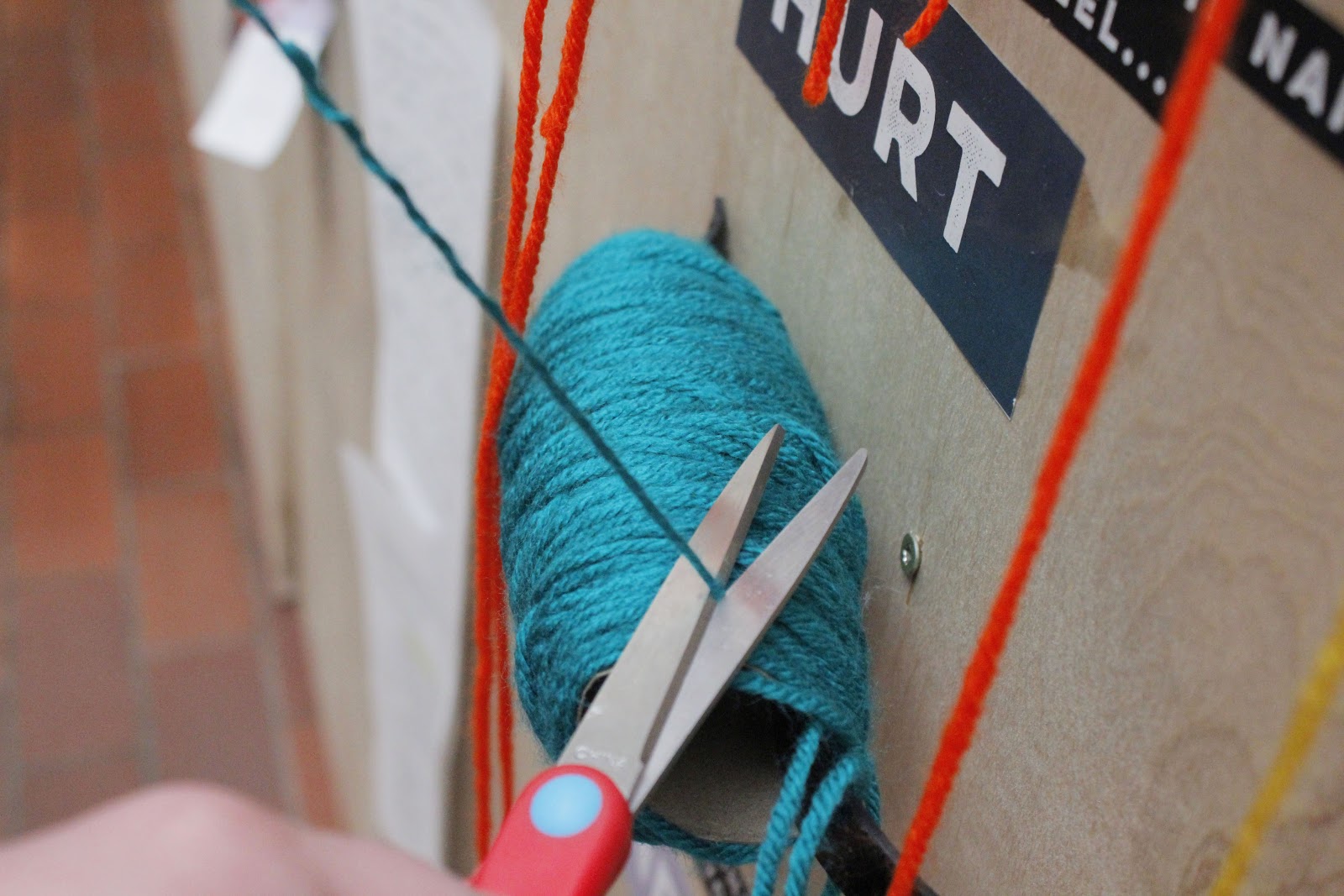 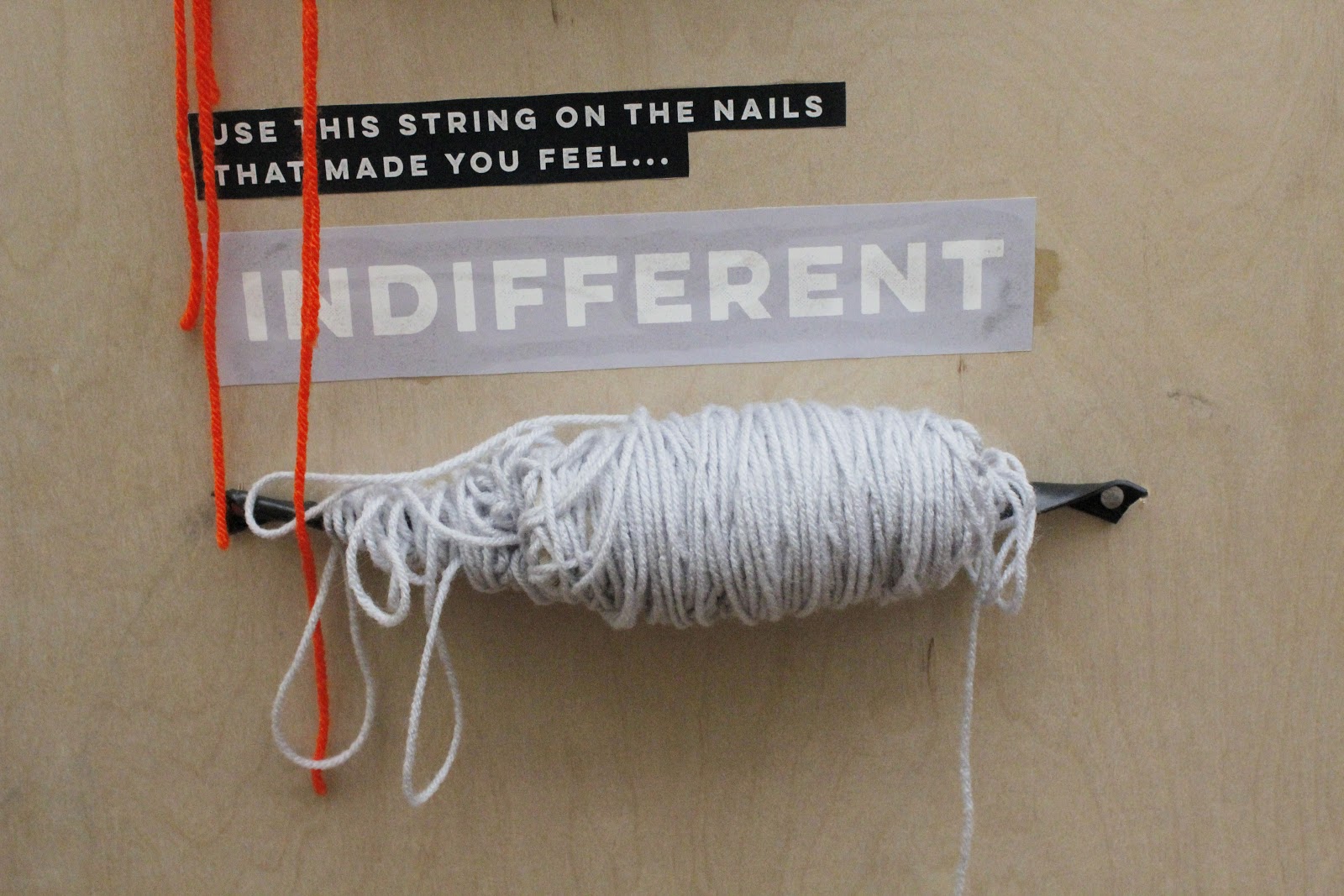 Nails line the rim of the wheel, each one representing a hot-button topic such as abortion, same sex marriage, rape, mental illness. Participants tie yarn from topic to emotion, creating an intersected weaving of diverse opinion.

There’s also an option for writing comments or notes that can be tied to the wheel.

After a few weeks of the wheel being propped in the hallway, someone scribed a handwritten note that read: “Every day is a struggle for me to get out of bed because every day is the worst day of my life.”

A few days later, someone else replied with a one-page handwritten letter that offered the person support and kind words as well as a second page of resources. 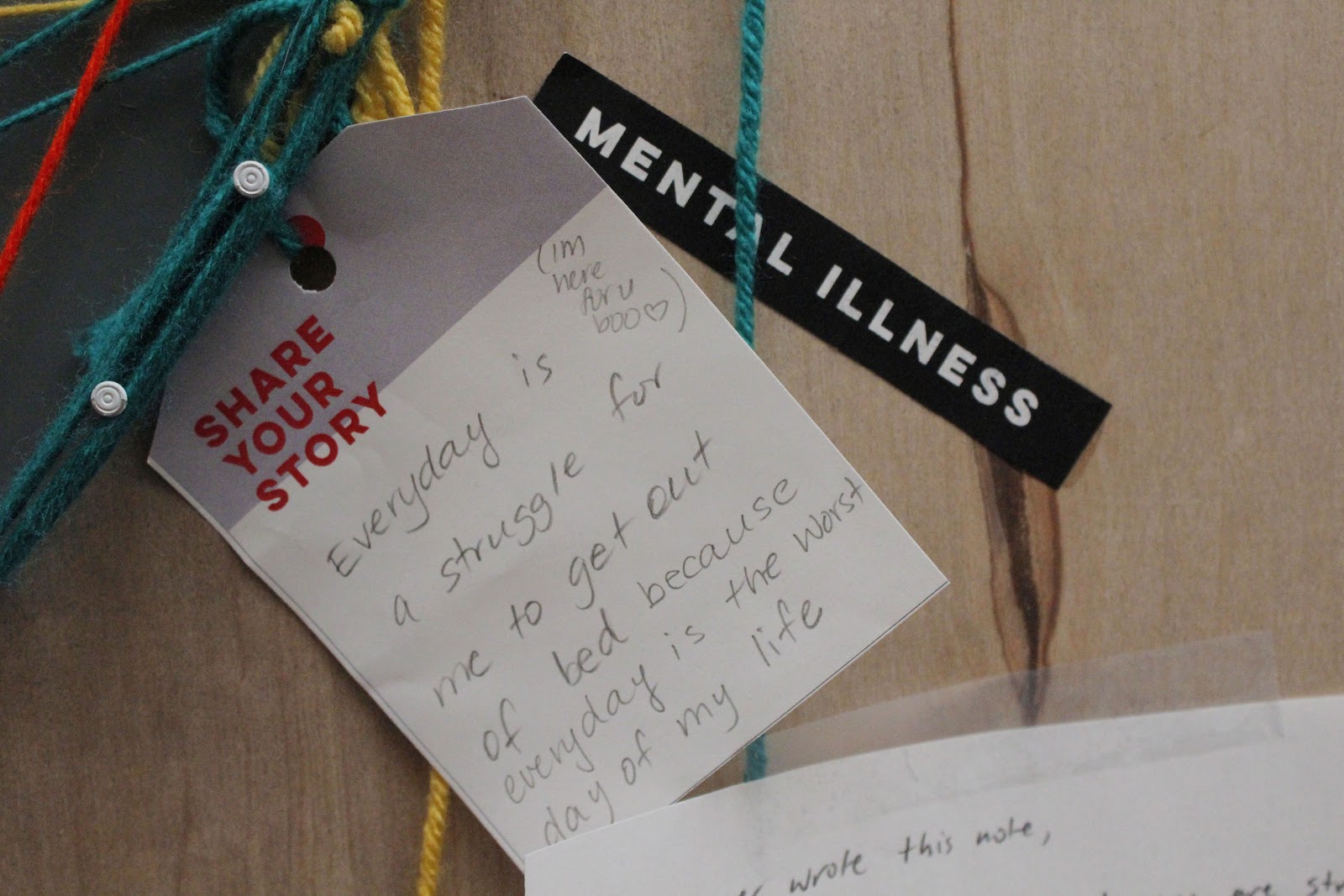 “It was one of the things I was really hoping to find with this piece — to surprise us; that folks would engage with it in a way that we wouldn’t have anticipated, and that was a super lovely example of that,” says Radzikowska. 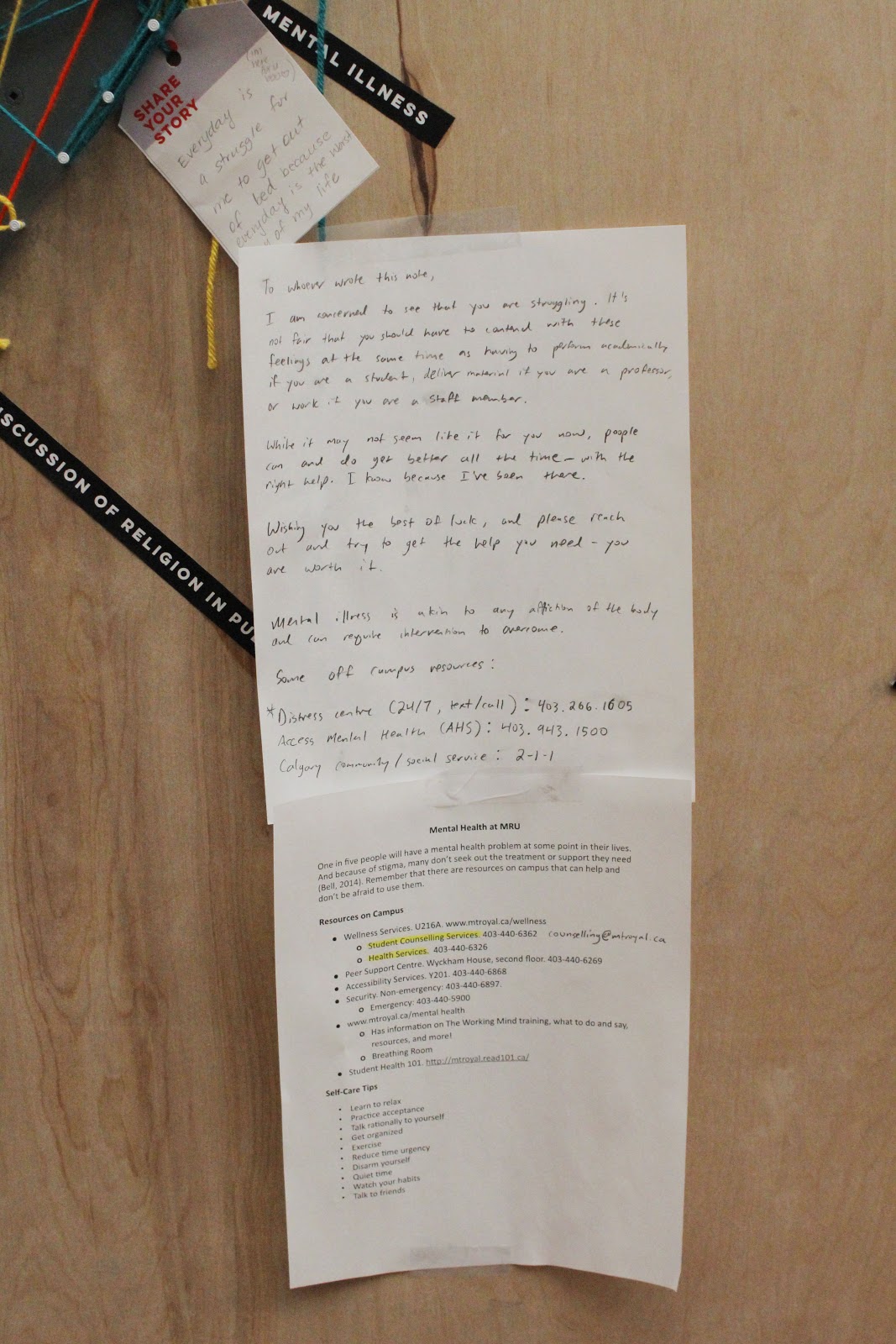 An anonymous response reaches out to the author of a struggling post, leaving kind words and resources. Making an example of the impact public art can have on a community. Photo by Rayane Sabbagh.

MRU student Karen Go stopped in her tracks, caught by the wheel’s riot of colourful yarn.

“I think it’s really cool and I like how the colours portray the major emotions of how people feel towards these aspects — it stands out more.” 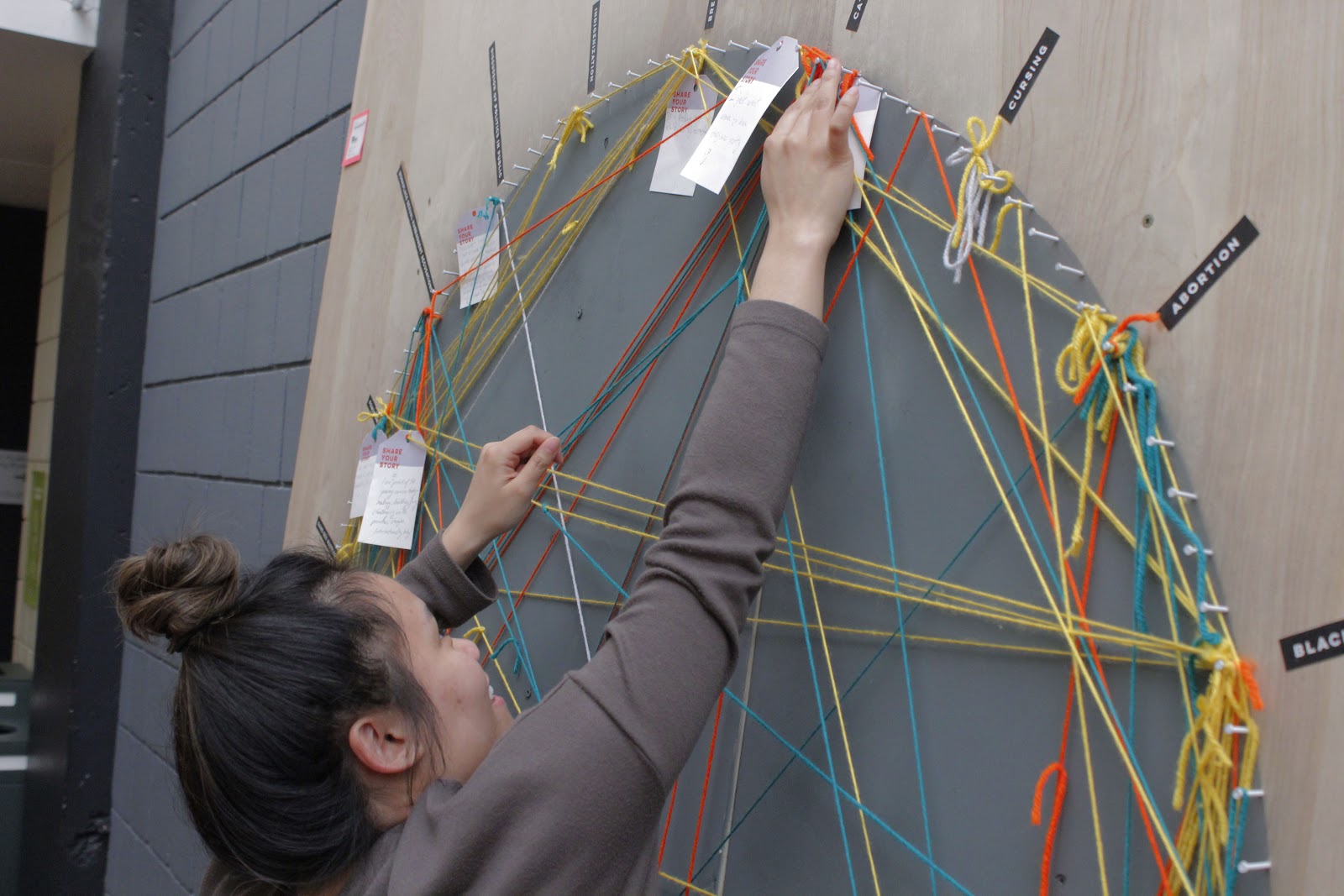 Mount Royal student Karen Go wraps blue yarn symbolizing hurt around the mental illness tab, and links it to the cat-calling tab, adding to the wheel of conversation on March 27. Photo by Rayane Sabbagh.

Radzikowska has spent the last few years taking online data and creating a physical representation of the information.

The wheel project mirrors that process.

“It's meant to challenge what we consider to be interaction with data,” says Radzikowska. “An object doesn't have to be embedded in technology to be found playable.” 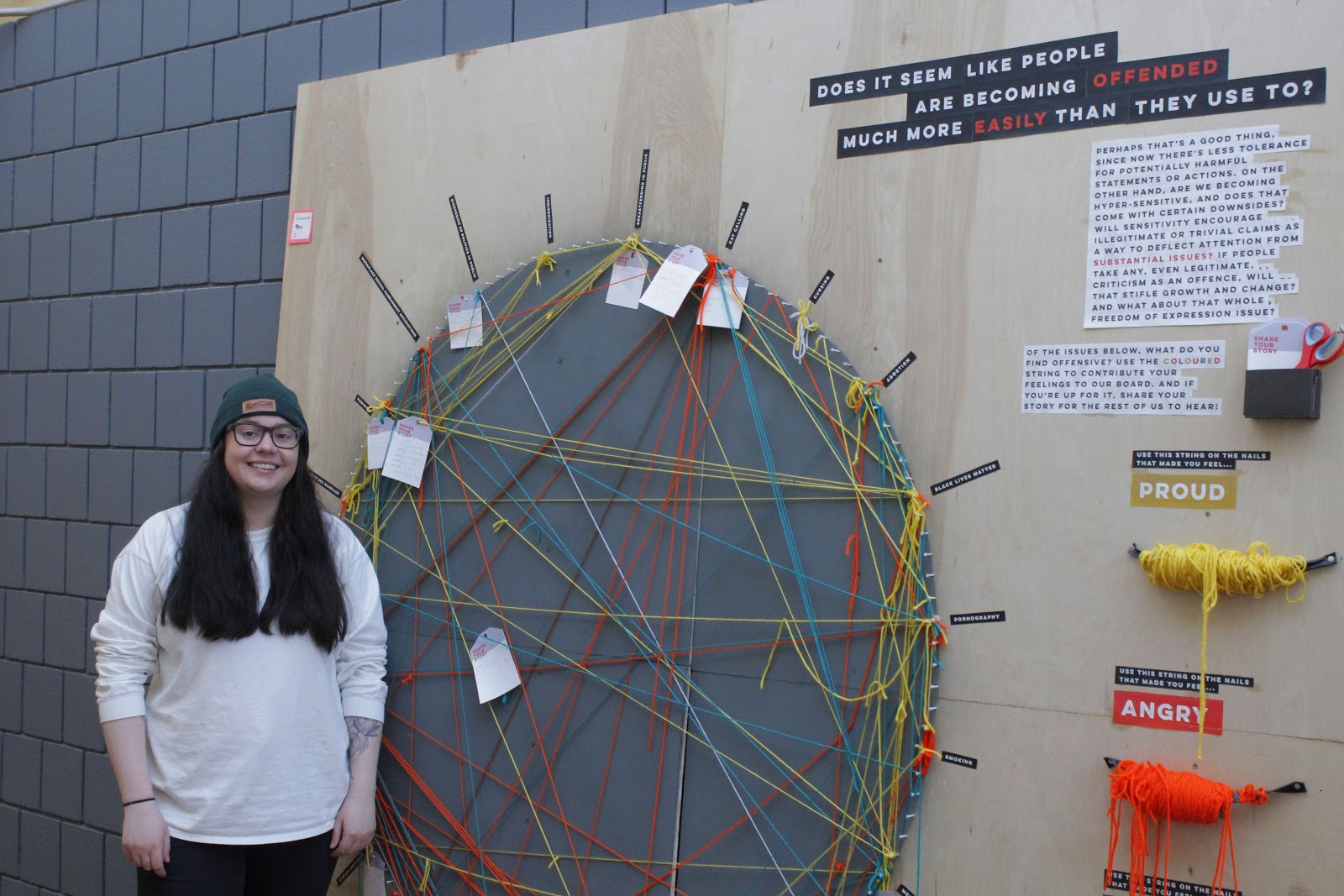 Dani Massee — graduating this year from the infographic design program at Mount Royal University — stands beside her data visualization. She hopes this project will help people gain more insight on controversial topics by stepping into another person’s shoes. Photo by Rayane Sabbagh.

“I think art can relate to everything,” says Massee. “It can make a meaningful impact, it’s not just something pretty, it can actually influence people and make you think a little bit more than you would on the average day.”