The rebirth of Vancouver’s Peach Pit, an indie-pop band that embraces weirdness and quirky performances after learning from past failures

The smell of hotdogs and anticipation floats through Tubby Dog, the Calgary-famous restaurant that provides live music to pair with their award-winning weenies.

As opener Andrew Phelan finishes his set, the gathered crowd shuffles forward trying to get as close as they can to the stage where the main attraction, Peach Pit, would be in the spotlight.

Once the sound of the first guitar chord echoed through the speakers, there wasn’t a single body in the crowd not moving and grooving to the beat, despite being shoulder-to-shoulder.

However, the Vancouver-based band, Peach Pit, didn’t always have such a compelling beat, having lost out in the first round of a local battle of the bands for “being so normal.” They took the criticism to heart and now, as a result of that feedback and their commitment to an enthralling social media presence, are touring around the world and are set  to release a new album.

Peach Pit lead vocalist Neil Smith and bass player Peter Wilton said that, while most of them – including guitarist Christopher Vanderkooy and drummer Mikey Pascuzzi – met when they were young, they didn’t become good friends until they were about 20 years old.

“Like four years ago is when we actually became friends,” said Smith, who also plays guitar.

Nevertheless, they’ve all been playing music together since they were kids. Despite the group forming prior to becoming what Smith dubbed as a “level two band,” they hesitated to play live because they wanted to deliver the best possible show to their fans.

“We practiced for like a year before we played any shows, which I think was a good thing because we never had any really bad shows,” said Smith, who wears a purple sweater with an orange collar – his attire for every show. “Sometimes we have ones we’re not that happy with but we’ve never really sucked at the beginning, which I think is a pretty common thing.”

When Peach Pit began touring, they didn’t get the reception from fans and critics they were originally hoping for. This was showcased at a local battle of the bands competition in Vancouver.

For their first full-length album release, they tried to embody the opposite, using their West Coast high school experiences as the foundation.

“I think for this album we didn’t really try to write an album. All the songs I just wrote over the course of a few years when we were kinda becoming a band. That was in a transitionary time in our early 20s when you’re not yet fully an adult, you’re still thinking about what happened in high school,” said Smith. 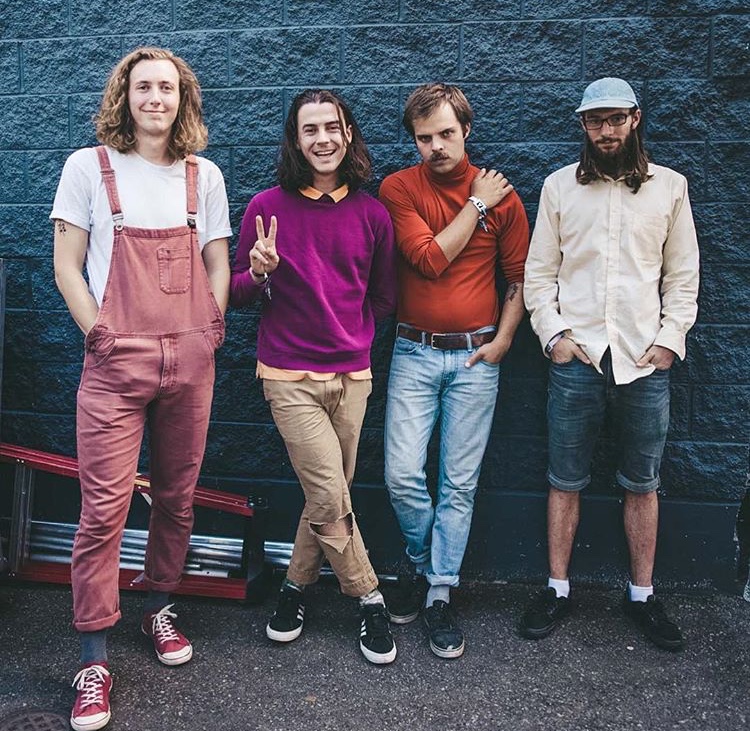 Peach Pit is unique in the way that they wear the same outfits for every show, with a look that is designed to try to make them look like five-year-olds at a birthday party. Photo courtesy of Kelli Anne.

Their music attracts the attention of many angsty teenagers, but their active social media presence and unique music videos are something fans really find value in.

“We spent so much money on the “Drop the Guillotine” video we did and then the “Seventeen” one we spent like no money on. … And then it went viral and got way more views,” said Smith. “It’s hard to say what people are gonna like. It’s such a crapshoot and that’s what the internet is,”said Wilton.

“You just get lucky sometimes.”

The man behind many of the artistic perceptions of the band is Lester Lyons-Hookham, who has a unique notion of the creative direction Peach Pit should head.

“I try to bring imagery for the band that I think is maybe a bit different from the norm in terms of the music industry, or things I think are lacking. Even if it’s just taking a new perspective of aesthetics that have already passed, or combining older trends in different ways,” said Lyons-Hookham.

From skateboarding and smoking cigarettes with Smith on their former retail night shift, to having a shared vision while creating new ideas, Lyons-Hookham found Peach Pit to be a particularly interesting project to work with for several reasons.

“Neil’s good songwriting and inherently natural collaboration of the group – not just musically – they’re just all around great life collaborators. They write really good songs,” said Lyons-Hookham, who believes they have found a successful recipe so far.

Now as they’re wrapping up their North American tour, they’ll be touring Europe for the first time in the new year.

“It’s going to be really fun. I’m mostly excited – unashamed about this too, but there are a couple songs on the album that are about my ex-girlfriend and she lives in Europe, so she’s probably going to be at one of the shows. So I’m kinda excited to play the sad songs I wrote about her,” said Smith.

“I’m really excited to go, not just as an adult, but to play music. It’s like, the best thing we could ever do,” added Wilton.

Their Andy Shauf-inspired songwriting takes a backseat with the vigorous touring schedule but whenever they can find some time, it’s back to business.

“We’ve got a couple new songs that we’ve been working on and I’m going to try to do some more songwriting. I’m actually kinda scared. The last album we didn’t really try to write, we just did it. Now with this one, it’s like, ‘You have to write another album now.’ We’ll see how it goes. I’m excited,” said Smith.

Dreaming Indie: How a local band like Windigo thrives